We just returned from our first weekend away. We traveled to Uluwatu with some other families from Green School. Uluwatu is south of Ubud and took about 2 hours by car. It was our first trip to the beach. Much like LA, the beaches closer to the city are not as nice and during the rainy season (which is now) can get rather dirty from the runoff — again, just like home!

We stayed at a lovely resort called Karma Kandara. The resort is built high up on a cliff and the views of the Indian Ocean are spectacular. There is a beautiful beach down below —so far down below that you have to ride a funicular which takes almost three minutes for the descent. 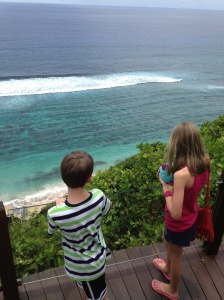 Cool clouds –shot of the pool overlooking the ocean

Same pic – earlier in the day – kids in the pool

The beach at the hotel is nice but, the reason most people travel to the area is for the Uluwatu beach. Not only is it beautiful, it’s also one of the most popular surf spots on the island. The only problem is getting to it. Access is down a flight of stairs that go on forever and culminate with a portion suspended 20 feet in the air, maybe two feet wide, and with no railings to hold. That was exciting! We kept commenting that if this were the U.S. there would be hordes of personal injury attorneys gathered at the bottom of the stairs. On second thought there wouldn’t be instead, there would be scaffolding and safety nets and most likely a wheelchair ramp. Just saying…

Once you finally make it down, the beach is pretty spectacular. The first part is a big cave that the water has eroded so, the tide comes in between the walls. The main beach is through a tunnel that you can only get through at low tide –and, if you stay too long you get trapped at the beach for several hours until the tide goes back out.

Beach when you get down from stairs

Another shot of beach

Stairs going up to little restaurant

The beach was great but, by far, the most exciting part of the trip for the kids was when the monkeys invaded our villa. We had just come inside after having drinks by the pool when one of the kids screamed “monkeys drinking!!” Just then ten monkeys swarmed onto the patio –one finished off my cucumber martini, one drank Allie’s mango juice, while the smallest one had a great time trying to figure out how to drink Coke from a can. He also hung out by the window while the girls tried to talk to him. 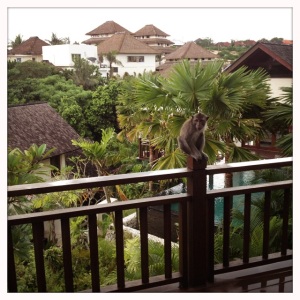 Monkey on the railing of our villa

Monkey finishing off our drinks

2 thoughts on “Trip to Uluwatu”