Here is an update on are some of the things Fletcher has been busying himself with at school and home.

Fletcher is now (mostly) happy to be in 2nd grade. It’s taken a little longer for him to settle in than it did for Allie. We made a tactical error and started him in first grade even though he was more then a year older and almost twice the size of several of the kids in the class. Being an international school, the age when kids start school varies a lot, but, in general, kids seem to be younger than at home. The red shirting of kindergartners doesn’t seem to happen much outside of the U.S.

After a week, it was clear to us and the school, that he belonged in 2nd grade so, he was moved. I think we may have underestimated the effect all the moves would have on him. He’s always transitioned easily so, we (stupidly) thought this would just be another transition. It’s taken a little time but, thankfully, he is starting to make friends and he seems much happier (phew!) Yesterday, he came home and was thrilled to show me the new song, (complete with obscene gestures), his friend had taught him. And today, he was excited to bring his new Balinese drum to school for music class (and the rest of us in the car were thrilled to hear him play all the way to school).

Last week in class, he got excited about learning how to make klangsa –which is a weaving made out of coconut leaves. Fletcher enjoyed it so much that when he came home he wanted to do even more weaving. With Dek and Wayan’s help, they cut down some coconut tree branches so he could continue to work on his weaving skills.

In addition to the important life skill of klangsa, Fletcher has been working on some musical numbers. This is a video of his class performing in a school assembly. Every Friday afternoon there is an assembly for the lower school kids. Often, it is a performance by one or more classes, at other times, the school brings in performers to educate and entertain the kids. Recently, Michael Franti performed which was followed by a green smoothie and raw food banquet (no, I’m not kidding…). Michael Franti is great — I tried not to let the fact that he hasn’t worn shoes since 1997 distract me from his talent.

More pictures of Fletcher at home.

Fletcher with a snail he found in our yard

Close up of snail’s shell

Everything is a bigger around here! Sorry Texas! 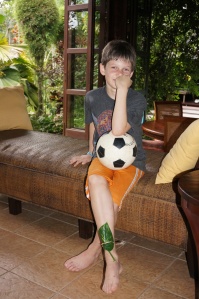 1 thought on “Fletcher at school”