I’m finally trying to get caught up on the blog. I’m about two weeks late in posting these pictures from the trip over.

We made it! It was a LONG 27 hours, but the kids did very well! I’ve never been particularly fond of their Nintendo game consoles but, they saved us during our 5 hour layover!

Leaving LAX –we may have overpacked!

After so many weeks of preparation, we were all excited to finally be boarding the plane to Hong Kong — Fletcher wasn’t shy about enjoying the great Cathay Pacific service! I’m not sure the kids had ever been on a flight that served food and drinks whenever you want them! Fletcher told us he wants to be a “businessman” — (like the other men on the plane) my guess is for the free food and drinks!

Fletcher – on the flight to Denpasar

Allie also enjoyed the flight. Lucky for us, her Furby (her favorite xmas gift), only chattered for about 5 of the 27 hours. (For those of you not familiar with Furbys, imagine a maniacally babbling, Japanese toddler crossed with the old woman from Poltergeist in the shape of a furry egg – yeah! Scary! And –it doesn’t have an “off” switch!) – I kept expecting it to suddenly open it’s eyes and declare – “this plane is clean.” 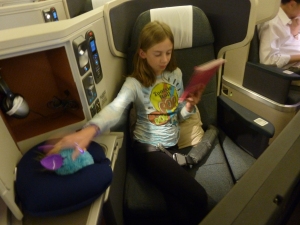 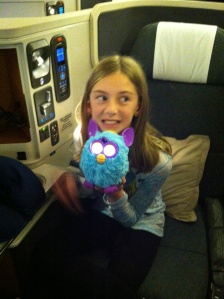 Furby gearing up to torture unsuspecting, nearby passengers

In the lounge in Hong Kong awaiting our next flight to Denpasar. The kids were thrilled to have unrestricted access to their games! 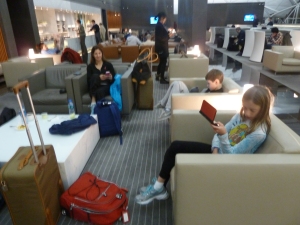 Waiting to get on our flight to Denpasar

At last, we arrived in Bali! Just a 1 1/2 hour drive to go and we will be at our house in Ubud. Our driver, Indra, and his brother both met us at the airport in two cars. Apparently, we couldn’t fit ourselves and all our bags in one! The customs agent was the first to give me the impression that we may have overpacked when he asked ” you open shop?” What? I thought everyone brought an entire duffel bag of dental floss. We may have panicked just a little from what we read on the internet about Bali. I’ve since discovered they do have stores here…who knew?! Maybe, I will open a shop. Another thing I’ve discovered is no one seems to worry much about copyright infringement. I saw a man pushing a fried chicken cart with the “KFC” logo painted on the side. I’m pretty sure KFC isn’t selling their chicken off carts pushed by old Balinese men these days but, now I’m thinking…. “Ubud Disney Store” or “Bali Walmart World” would be a huge hit!

1 thought on “Getting to Bali”